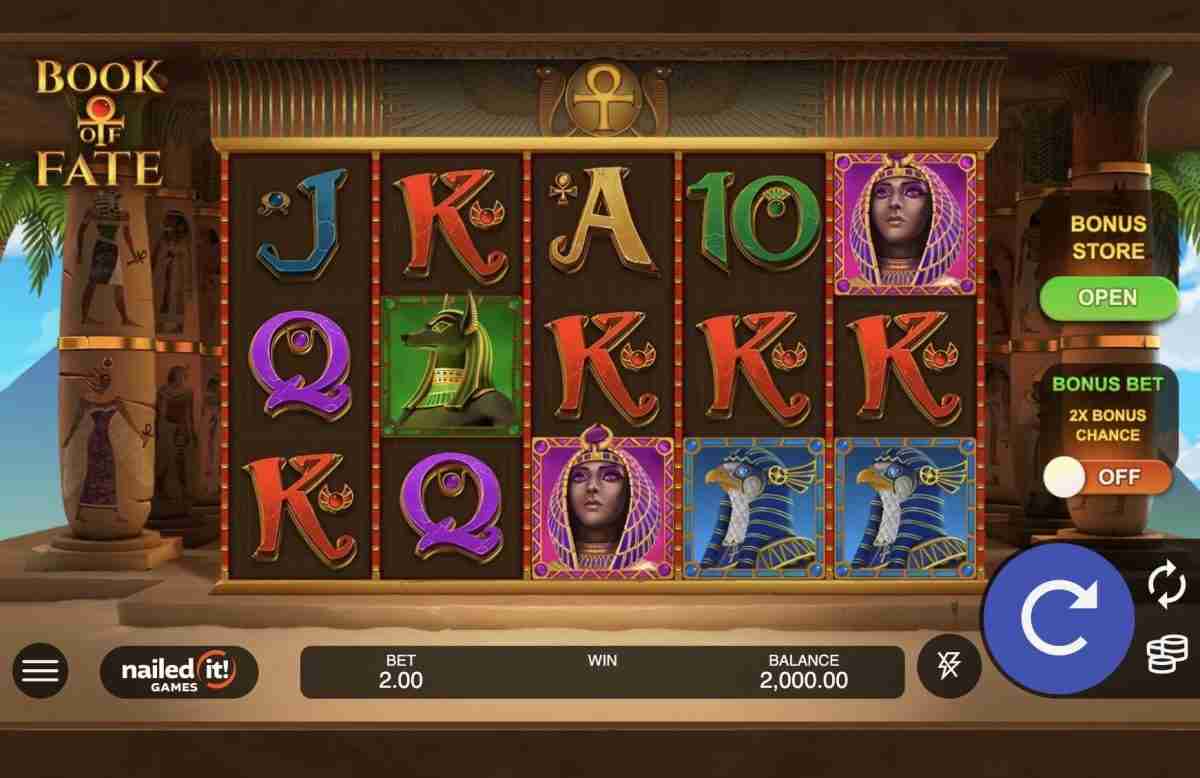 Book of Fate the long awaited second slot by Polish provider Nailed It Games is now available for free demo play on demoslotsfun.com There are a number of reasons why we have been looking forward to this one but first and foremost because it is just the second slot machine that Nailed it Games have released.

Start the Book of Fate demo slot and you will notice the high quality of the graphics and animations and the very detailed symbols that decorate the reels.

As you will likely know it is almost compulsory for any developer to create a slot with ‘Book’ mechanics although most that we have seen do not attempt it on their first few releases. Full marks to Nailed it Games for going for it with just their second release following on from their debut slot machine.

The somewhat understated look and feel that the provider has used for this slot really does resonate with us and makes a nice change from a lot of over the top designs that we encountered as of late.

Nailed It Games clearly decided to really go with it for this release by cranking up the winning potential to a very massive 50000x your bet, we will take a look at how this achieved shortly but first let us check out the rest of the numbers.

Its a 5 reel slot with 10 paylines which is about as traditional as it gets for this type of slot and as you would expect the volatility is high given the high maximum win amount.

For those interested in the return to player (RTP) value this is also a very respectable 96% so numbers wise Book of Fate really is a slot that ticks all the right boxes.

So theme wise it would be fair to say that while it looks decent the visuals don’t set it apart from most slots in the Book genre. More importantly though is of course the fact of making a book slot that plays differently from most. A task that we have seen quite a few providers fail miserably at before and will likely see again in future.

But Nailed it Games pretty much live up to their name with this release. Granted they haven’t made huge changes but the ones that they have introduced do add something positive to the original mechanic and that really is what it is all about.

Well first of all there is a random single free spin that can be triggered during the base game and more importantly this comes with the same up to 10x multiplier with the special symbol that makes the free spins round an upgrade from most standard book type slot machines.

And if that is not enough there is actually a super free spins round that can be triggered where not one, not two but all symbols are expanding and this in combination with the multipliers can create some pretty insane wins.

We really do think that this provider have created a slot that is a worthwhile addition to the gameplay of your standard book type mechanic and we have to applaud them for doing so. Achieving this with just your second slot is another impressive feat and reason enough for us to really look forward to trying out the demo version of their other upcoming slots.

Visit our Nailed it Games demo slots section to try this demo for yourself its a slot that is definitely worth a spin in demo mode and if you like high variance slots with massive winning potential you can give it a spin for real money at any of our recommended online casinos that we list on demoslotsfun.com