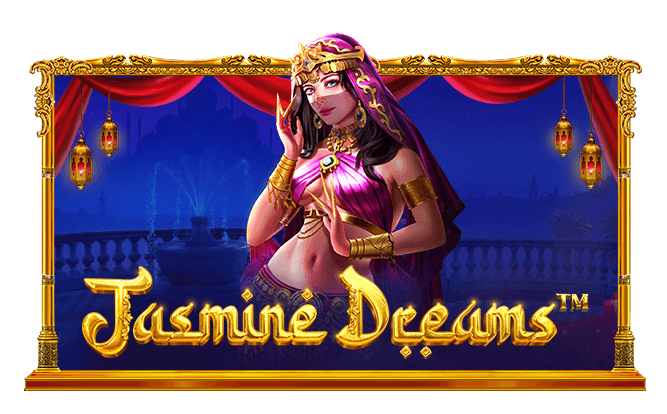 Jasmine Dreams by Pragmatic Play is a slot game that transports players to the world of Arabian Nights. Scheduled to be released by Pragmatic on the 9th of March 2023, we at demoslotsfun.com are once again in a unique position to provide you with early access to the demo version of this slot.

Having really liked what this provider had done with some earlier releases that featured themes in this genre we were really looking forward to getting to play the Jasmine Dreams demo slot.

Earlier releases like Aladdin’s Treasure and Aladdin and the Sorcerer were fantastic looking and sounding slot machines and each of them came with pretty decent gameplay and good numbers as well.

So with Pragmatic Play having plenty of experience at making a slot that falls into the loosely labelled “Arabian Nights” category we really should not have been surprised when we loaded the Jasmine Dreams demo slot for the first time.

Turns out though that we were as the designers at Pragmatic Play have pretty much outdone themselves for this release and thanks to the use of very detailed graphics, amazing animations and a selection of great sound and music the result is what we consider to be the best looking slots in this genre to date.

This naturally made us curious about the gameplay but first let us take a brief look at what kind of slot this is. It’s a pretty straight forward setup with the almost traditional format of 5 reels and 20 paylines. The volatility is rated as high and the maximum win amount is 2500x your bet which is actually rather low although it may well be increased when this slot is officially released.

Normally we would expect to see a 5000x your bet for a slot like this by Pragmatic but let’s wait and see.

For those not familiar with Pragmatic Play slots we should note that the RTP is adjustable and there are three different values that an online casino operator can select with highest being 96.46% which is obviously a pretty decent number.

As we tend to do, we spent quite a bit of time playing the Jasmine Dreams slot demo as soon as we were given access by Pragmatic Play.

Turns out that this slot is relatively simple, Jasmine who is the main character for this slot (a female Aladdin we would assume) acts as an expanding wild when she appears on the reels and this feature definitely helps create a bit more action making the base game a lot less of a grind then is often the case.

More interesting though is the free spins round which as usual can be triggered by landing 3 scatters or by using the buy feature that Pragmatic Play have also added to this slot. Free spins can be retriggered which is something that we at demoslotsfun.com are always a fan of.

Overall though we personally were hoping for a bit more with this release. The fact that the winning potential is rather low in combination with the gameplay in which we lost interest rather quickly is not really balance or countered out by the rather amazing look and feel of this slot.

As always though we suggest playing the Jasmine Dreams demo slot for yourself which you can do by visiting our demo slot Pragmatic Play section of our website were you will also find more exclusive early access demo versions of several upcoming Pragmatic Play slot machines.