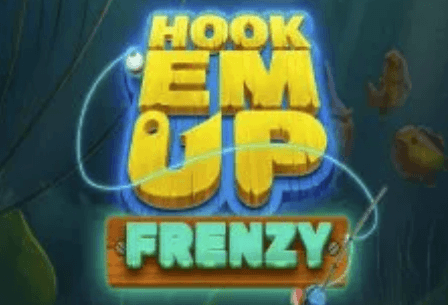 Get ready to cast your line and reel in some big wins with Hook’ Em Up Frenzy demo slot from iSoftbet a slot which is scheduled to be released and will be available at all of our recommended iSoftbet casinos from the 5th of January 2023.

This fun and exciting slot takes players on a fishing adventure filled with colourful characters, lures, and of course, plenty of fish as you will see when you start the Hook’ Em Up Frenzy demo slot which is already available to play for free on demoslotsfun.com

2022 did of course see a huge number of Fishing themed slot machines being released and even for a provider like iSoftbet this is not the first time that they have released a slot in this genre.

Personally we are pretty done with Fishing themed slots much in the same way as we grew tired of Megaways slots with little or no interesting features being released.

This however is a bit of a different beast and iSoftbet have created a high volatility slot with a massive maximum win amount that is sure to appeal to even those players like ourselves who really did not want to play another fishing themed slot machine for quite some time.

In terms of how this slot is setup we are looking at a familiar 5 reel and 243 payline setup with it having an RTP of 96% which is of course solid. As stated the variance is high but this really is balanced rather well by a maximum win amount of 25000x your bet which we are sure you will agree is substantial by any standard.

Theme wise this might not be the best looking slot that we have seen out of all the fishing slots but it certainly is not a bad looking slot although it has to be said that it does not feel like there is any fishing actually going on which does feel a little bit weird. We do like the rather country/banjo sound track though which really does set the right tone for the theme.

It is however the gameplay of Hook’ Em Up Frenzy which we feel makes this a slot worth playing. During the base game there is the randomly triggered Go Fishing Spin which will involve multipliers of up to 27x in total.

Now while this can certainly still deliver you a nice catch it is the 8 free spins that 3 scatter symbols award that make this slot worth playing. The reason is simple it is because the multiplier go way way higher during the bonus game and this is how you can land a record catch. We would say fish but as we said there really aren’t any fish being caught when playing this slot. The only fish that ever appears is the one that creates the multipliers but then again this makes a nice change from the multitude of fishing slots.

Overall though iSoftbet have created a fun and possibly rewarding slot machine that really should appeal to those that like their slots with a little bit more bite. It certainly is not a player friendly slot as we found out when we played the Hook’ Em Up Frenzy slot demo before adding it to our site.

So if you are looking for an engaging fishing themed slot that can really deliver that record breaking catch be sure to check out the free demo slot which can be found our iSoftbet demo section where you can also play some more exclusive demo versions of upcoming slots by this developer.