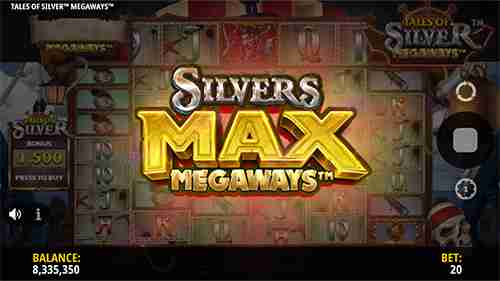 Are you ready to embark on a high-seas adventure filled with treasure and excitement? Look no further than Tales of Silver Megaways demo slot from iSoftbet which from today is playable for real money at all iSoftbet online casinos.

At demoslotsfun.com however the demo of this Pirate themed slot machine has been available for free play to our visitors for the past month and you can still try the Tales of Silver Megaways demo slot right now which is of course always a good thing to do before playing any slot machine for real money.

This slot marks the first release in 2023 for iSoftbet and we have to give them credit for breathing life both into the Megaways mechanic and the rather crowded Pirate themed slot genre.

The visuals and sound effects in Tales of Silver Megaways are first rate immersing you in the pirate theme from the moment that you start the demo slot. Symbols on the reels are typically pirate related with compasses, flintlock pistols and of course Captain Long John Silver all making an appearance.

2022 saw a lot of Megaways slots being released with numbers that to us at demoslotsfun.com left quite a bit to be desired. There were a few good slots but overall we were not really that impressed by a lot of developers just releasing mediocre and generic Megaways slots.

For this release though iSoftbet have taken no chances as the following numbers will illustrate. While we are looking at a pretty traditional Megaways setup with 6 reels and up to 117649 ways to win the maximum win amount really is rather treasure like with a massive 37500x your bet. Even by the standard of high variance Megaways slots like this that is an impressive number although it is of course calculated over a large number of spins.

Gameplay wise start the Tales of Silver Megaways slot demo and you will encounter the familiar cascading reels mechanic but then things get a lot more interesting and new with the first main feature being the gold coins which transform other symbols during both the base game and the free spins round which is where the real treasure is to be found.

While it does require four scatter symbols to trigger 12 free spins you can actually be awarded up to 27 if you land 8 of them.

It also nice to see that the free spins can be retriggered and things get even more exciting when you find out that the somewhat traditional progressive multiplier feature is unlimited when playing Tales of Silver Megaways.

Overall, Tales of Silver Megaways is a thrilling and immersive slot game that is sure to appeal to players who love pirates and the high seas although it must be noted that this is not a slot for the casual player due to the high variance and you can get a lot of dead spins. It is a fun slot to play in demo mode though and you can do so by visiting our iSoftbet demo slots section where you will find this slot and many other demos of upcoming iSoftbet slot machines.