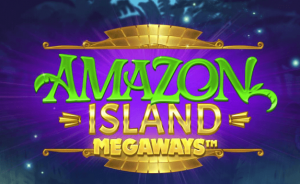 Max Win Gaming have actually stated the maximum win to be possibly higher than that but either way these numbers are about par for the course for a Megaways release so you won’t hear us complain about that.

You also won’t hear us complain about the way Amazon Island Megaways looks and sounds, its a rather well executed theme actually and one of the better looking slots that we have seen released by this developer.

There are of course a huge number of Megaways slots that have been released and continue to be released and its rare to find one that does things a little differently.

Max Win Gaming have attempted to be different though and most of the difference is found in the bonus round of this slot machine, Instead of your standard free spins you basically have 3 free spins, if one of them hits a prize the teller is reset to 3.  The progressive multiplier is also in play for the entire round.

If you land three scatters you are awarded the standard free/re spins, if you land 4 you get a 5x starting multiplier. In addition there is the Jungle Wheel which spins before the free spins commence and allocates a minimum number of Megaways.

All these things combine very well and actually make this a little different and more interesting than most Megaways release. All in all a rather good effort and Amazon Island is a slot that we think many of you will enjoy giving a spin or two.

If you are having problems trying to play the free demo of Amazon Island Megaways slot we suggest refreshing the screen. If the problem continues to persist please contact us.