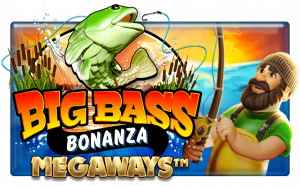 We do have a couple of comments about these numbers, first up the RTP on this slot can be one of three different settings, the one above is the highest setting which is a good number, the other two numbers are lower and 95.66%, and 94.62% respectively which of course would make this slot much less attractive to play for real money.

As always if you are not sure what setting your online casino is using we suggest checking with them before playing. The second comment we would like to make is that the winning potential on this slot is on the low side not just for a Megaways release but generally speaking for a high volatility slot we would like to see at least 5000x your bet as a maximum win amount and for a slot in the Megaways genre even more.

That aside Big Bass Bonanza is the third release in the Big Bass series of slots which up to date have been quite popular with fans of Pragmatic Play. The second in the series was release not long ago (Big Bass Bonanza) and the developer clearly has seen enough interest in that to justify spending resources developing this Megaways version.

Theme wise there really is no difference with the first two slots in the series and this similarity is carried through to the gameplay of Big Bass Bonanza Megaways.

As before the fishing hook is the highest paying symbol and the 10 the lowest. Key to landing a decent sized win (pun intended) is to trigger the free spins round. Unfortunately nothing new here either so we can only come to the conclusion that Big Bass Bonanza Megaways is a bit of a letdown overall.

While we could see why the first two installments were quite popular with players we do feel that coming out with this third slot in the series might have been a bit too much of a good thing and we really feel to say how this slot will become popular to any degree at all.

All in all a rather mediocre release that could have been so much more.

If you are having problems trying to play the free demo of  Big Bass Bonanza Megaways slot we suggest refreshing the screen. If the problem continues to persist please contact us.