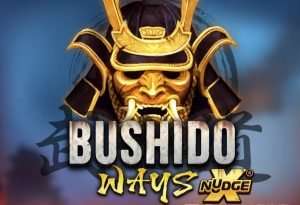 Now Nolimit City have been  on fire lately when it comes to releasing high volatility slot machines with massive winning potential and Bushido Ways xNudge if anything strengthens this trend. This visually stunning slot machine evokes the era of the great Samurai and values such as honor, respect, tribute, fear and revenge. In short all the ingredient to make a slot machine that tells a story taking the player on a journey through feudal Japan.

There are several pretty standout features but first lets look at the base game of Bushido Way xNudge where you basically wait for Bushido Warriors to make an appearance on the reels, something that occurs randomly and results in Shogun free spins being awarded.  But this is only part of the story as from there it is possible to progress to the even better Geisha free spins and this is accomplished by landing a Wild Geisha on the reels.

Now you would think that would be more than enough to make this slot interesting but Nolimit City have seen fit to add yet another level to the bonus game which in our experience is a real mission to achieve The boss level achievement of this slot is Journeys End which can only be reached by reaching the maximum payout of 30000x your bet an ending of truly epic proportions.

So to sum up we have Shogun Spins of which 8 are awarded if you land three Samurai (with 1 additional free spin for every extra Samurai), Geisha Free Spins which are triggered by three more Samurais and the Wild Geisha appearing (for every nudge you get a sticky multiplier and you can get more free spins for more symbols)

So its fair to say that the bonus round of Bushido Ways xNudge is as exciting as ever on a Nolimit City slot but thankfully the base game also has some potential thanks to Wilds & Sliced Wilds and the Oni transform.

We do stress that this is an extremely volatile slot machine, and when Nolimit City says a slot is extremely volatile you really need to take heed should you decide to play Bushido Ways xNudge for real money which we ourselves are certainly going to be doing as soon as it is released.

If you are having problems trying to play the free demo of  Bushido Ways xNudge  slot we suggest refreshing the screen. If the problem continues to persist please contact us.