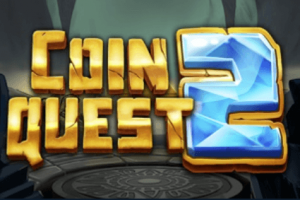 Coin Quest 2 is a 6 reel slot with a cluster pays mechanism made by Slotmill. It has an RTP of 96.18%, high volatility and comes with a maximum win amount of 15000x your bet. The Coin Quest 2 demo slot is available to play for free on our site.

Now Slotmill are a developer who have since the day that they released their first slot machine stated that they design for players and listen to feedback. The first point is perfectly illustrated by the fact that with each and every single slot machine that they release that the RTP is fixed and solid as is the maximum win amount. This really is a bit of a rarity and full credit to them for doing so.

Now as you might know the original Coin Quest slot was released only 6 months before this one and if you start the demo slot you will see that the theme holds pretty true to the original. Its a great looking slot and the larger grid makes it look even better.

On that note the grid is not the only thing that has changed, as we mentioned this provider listens to players and they have therefore increased the chance of the bonus feature being triggered.

In fact there are now two bonus features Free Spins and Super Free Spins with the last naturally capable of bringing even more excitement than the first one.

Slotmill have also added their Burst and Fast Track features, the last is their version of a buy bonus game feature and the first lets you play two spins in quick succession.

All in all this is a rather worthy sequel to the original and we can really see this one becoming even more popular than the first slot in the Coin Quest series. On that note we are curious if and when a third installment will be released but demoslotsfun.com is of course the site where you will be able to play it in demo mode first if it does get created.

If you are having problems trying to play the free Coin Quest 2 demo slot we suggest refreshing the screen. If the problem continues to persist please contact us.