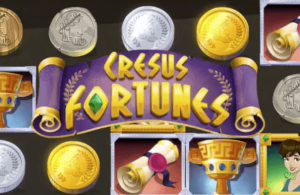 Cresus Fortunes is a 5 reel slot with 20 paylines made by iSoftbet. It has a RTP of 96%, low volatility and a maximum win of 1200x your bet. The Cresus Fortunes demo slot is available to play for free on demoslotsfun.com

So looking at those numbers we can clearly conclude that this like the most recent slot released by iSoftbet is a slot aimed at the more casual player which of course makes a nice change from all the high variance slots that we have seen as of late.

The return to player percentage is solid at 96% and in combination with the low variance the 1200x your bet is more than acceptable so no complaints at all.

For those of you not familiar with Greek mythology Cresus or Croesus as he was more commonly know was a king of Lydia (a kingdom that lies within the boundaries of modern Greece) who ruled around 580 years BC.  He was renowned for his wealth and became almost mythological and hence we can understand why iSoftbet decided to create a slot based on him although with the wealth thing perhaps a higher maximum win amount would be in order.

Be that as it may we (as we usually do) loaded the demo slot and decided to give this one a spin. Theme wise its a cartoon representation of history that you will encounter should you also decide to play the Cresus Fortune demo slot. Its a look and feel that we actually like as you can see that some effort has gone into making it a unique look and feel that really makes it look like a comic.

Gameplay wise there is not a huge amount to discuss as in essence this is (some might say once again) a Hold & Win focused slot by iSoftbet. We will however say that unlike a lot of providers iSoftbet do try to add some variety and features to their Hold & Win slots and this time it is reel modifiers.

Is this enough to ensure that its a popular slot? We are honestly not sure, we definitely had fun playing the demo but its not a slot that we will likely be playing again in the near future. You may well feel differently though so give the Cresus Fortune demo slot a spin and let us know what you think of it by leaving a rating on this review.

If you are having problems trying to play the free Cresus Fortunes demo slot we suggest refreshing the screen. If the problem continues to persist please contact us.