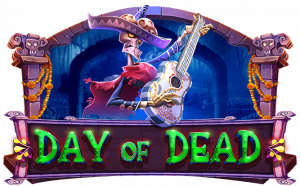 Those numbers are above average for the RTP and around the industry average when it comes to the maximum win amount for a slot of this variance.

The Día de Muertos theme is one that we have seen used in quite a number of slots and there have in fact been some really good release in this genre. First impressions of the Day of Dead slot are pretty good, as you would expect there are a lot of different skull symbols making an appearance on the reels as well as the traditional guitars, drums and card suit symbols.

It makes for quite a spooky impression but in a quite funny cartoonish way.

Gameplay wise Day of Dead is a little different from most standard type slots, the main thing being here that there are no free spins instead we are looking at a Free Respins for the bonus round.

To make more sense of this we first need to discuss why this is not actually a bad thing (it usually does not work out that well when a slot does not come with a free spins round). Day of Dead comes with a travelling wild feature as well, this of course is something that we have seen on quite a few slots which we have in fact enjoyed playing.

Many of you will be familiar with how this works but we will explain just in case. Whenever an expanding wild appears on the screen it turns into a walking wild, meaning it moves one space left with each subsequent free respin.

This keeps going until it has left the 1st reel but if another expanding wild appears the whole show goes on until that wild too has left the reels.

Now as stated this feature has worked well on some slots in the past and Day of Dead is no exception. It is quite possible to get a very long series of free respins and end up with a big win near the maximum potential of this slot.

It is however quite volatile so you there will be a lot of times playing Day of Dead slot when the feature turns into a big nothing burger.

There is also some good news for those of you that do not want to wait to trigger the respin feature naturally, Pragmatic Play have included a buy feature on Day of Dead. Do note it will cost you 100x your bet to trigger it though.

So all in all how do we feel about this one? Well its quite entertaining and it certainly is possible to land a good sized win, its not as entertaining as say Esqueleto Explosivo though but its decent.

If you are having problems trying to play the free demo of  Day of Dead  slot we suggest refreshing the screen. If the problem continues to persist please contact us.

At Demo Slots Fun we are often notified months in advance of upcoming slot machines and able to give you early demo slot access.

When this is the case we immediately create a slot machine review page with information that is available at the time. This is the same page where we will later add the slot demo that you can play for free.

We will not do a complete review until we are able to play the free demo provided by the developer. Once we have access to the free demo we will play each slot machine extensively and update the slot machine review with up to date information.

Often we are given access to the demo on an exclusive basis and it will take a bit longer before we can add the demo for free play on our site.