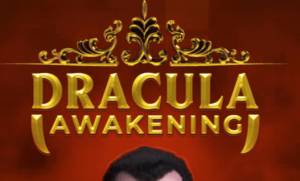 Once again Red Tiger stays true to form with the RTP on this slot as it (as it always is) is below 96% which is the number that we would really like to say.

Having said that though the first impressions of this slot are pretty good. The Dracula theme is of course one that has been attempted by many developers previously but Red Tiger have done a really good job on making this one stand out from those. There is no denying that Dracula Awakening looks and sounds awesome.

The reels are set in front of Count Dracula’s castle and at the top you will find a type of clock which goes from Day to Night, this one feature made us interested in playing this slot right from the get go.

After 16 spins (or 16 hours) the day turns into night for another 8 hours (or 8 spins) during which Dracula becomes active, land him on the middle reel during this time and he has the ability (among other things) to transform the lady symbol into a wild as he is a Super Dracula at night time.

The best chance of landing a big win though is to trigger the free spins mode which can be accomplished by landing three Eclipse symbols on the reels. We will let you find out exactly how those work by playing the Dracula Awakening demo that is available on this page.

All in all this really is a rather atmospheric and engaging slot machine, its not overtly complicated but it does have some playability and decent winning potential.

If you are having problems trying to play the free demo of Dracula Awakening slot we suggest refreshing the screen. If the problem continues to persist please contact us.