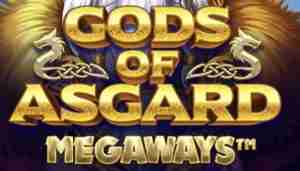 If there was ever a Megways slot that ticked all the right boxes when it comes to the numbers this would be right up there with the best of them seeing as how the RTP and the maximum win amount are way above average for a slot machine of this type.

Theme wise absolutely no surprise as to what you can expect to see when you start the Gods of Asgard Megaways demo. Four Norse gods take the center stage in a distinctly Asgard like (well what everyone imagines Asgard to be like) setting.

Iron Dog Studio designers have as always done a really good job of it so no complaints from us on this score either. The symbols on the reels really are exceptionally well drawn and the background though static helps set the scene.

Its nothing new but as always this mechanic does add some action and during the free spins round which can be triggered or bought stuff can get pretty exciting.

All in all this might be a Megaways release that does not really bring anything new to the table but its still a very good slot and you cannot get around the fact that the winning potential is fantastic.

If you are having problems trying to play the free Gods of Asgard Megaways demo slot we suggest refreshing the screen. If the problem continues to persist please contact us.