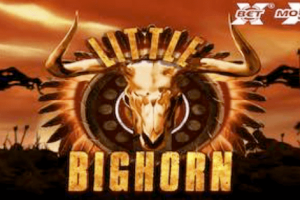 Little Bighorn is a 5 reel slot with 360 paylines developed by Nolimit City. It comes with an RTP of 96%, high volatility and a maximum win of 25676x your bet.

The RTP is actually a very tiny amount above 96% apparently but for this review we decided to round that number down. The maximum win amount on this highly volatile slot is over 25000x which is of course very good by any standard.

So basically we have very little to complain about when it comes to the numbers on Little Bighorn.

Nolimit City do like to go for somewhat controversial topics/themes although for this release there really is nothing that controversial about the battle at little bighorn except for the fact that this battle even took place. Some might say that naming the features scalping and having heads cut off or similar might be a bit much but really compared to other Nolimit City releases this is pretty timid stuff.

It is however undeniable that the design team at Nolimit City have done yet another great job. Yes we know its getting repetitive but the fact remains that the slots produced by this developer are of a consistently high standard.

This time Nolimit City have gone for a non traditional layout of the reels resulting in 360 paylines which is not something we recall seeing before on any slot. Some might say (and perhaps rightly so) that Nolimit City sometimes puts too many features in their slots but in the case of Little Bighorn they have toned things down a little.

No only is this slot a little less feature pact it is also a bit more player friendly than some of their other recent releases which have been extremely volatile. There is a respins round and a Scalp Wild that help keep the base game interesting but as is usually the case you really want to land enough scatters to trigger the free spin round to get your best chance of a big win anywhere near the potential that this slot undoubtedly has.

All in all it really is just another very good slot machine from Nolimit City and fans of this developer will undoubtedly enjoy the Little Bighorn slot both in demo mode and for real money play.

If you are having problems trying to play the free Little Bighorn demo slot we suggest refreshing the screen. If the problem continues to persist please contact us.