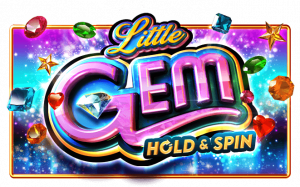 Little Gem is a 3 reel slot with 5 paylines made by Reel Kingdom and released by Pragmatic Play, it comes with an RTP of 96.7%, medium volatility and a maximum win of 2460x your bet.

Those are actually pretty good numbers and even more surprising is the fact that while this is yet another variable RTP slot there are only two settings. The lower one is 95.65% and while this is still below 96% it is much higher than the lower values which we usually see.

Theme wise the thumbnail pretty much tells you all that you can expect when you first try the Little Gem demo slot on this page, its a friendly looking almost candy type slot that has been well designed.

It has been a while since we have seen Pragmatic Play release a three reel slot and while it can be hard to make this interesting they have certainly done their best. How have they achieved this? Well they have added a hold and respin feature which is triggered by landing 3 coin symbols on the middle payline.

Either Silver or Gold coins will activate the feature which results in you starting a round with 4 respins. This pretty much works as a Hold and Win, land another symbol and the counter is reset to 4.

The symbol that you really want to see appear during this round is the diamond which could result in a multiplier between 100 and 500x your bet.

All in all its really not a bad effort by Reel Kingdom and Pragmatic Play to make an interesting three reel slot, it is admittedly rather simple but the lower variance and yet decent maximum win amount still result in a decent enough slot for players that like this risk/reward profile.

If you are having problems trying to play the free Little Gem demo slot we suggest refreshing the screen. If the problem continues to persist please contact us.