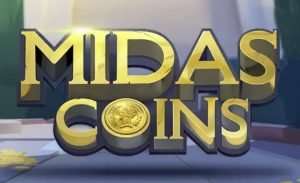 Midas Coins is a 5 reel video slot with 25 paylines. It comes with high volatility, an RTP of 96% and a maximum win amount of 5000x your bet.

Those are numbers that seem to have become the industry norm with developers all releasing slots with very similar profiles.  Now this is once again a slot that does not need us to explain to you what the theme is, after all most of you should be familiar with King Midas.

Having said that we would have expected a more golden or glittering slot setting than the one we find ourselves in when we first start up Midas Coins, instead of Golden palaces we find ourselves in an almost contradictory setting with the reels surrounded by marble pillars on the left, some park scenery on the right and a staircase leading into the beyond, presumably up to the actual palace.

Now it turns out that Midas Coins is a pretty straight forward slot machine, there are only two real features, one is the coin collect feature with coins appearing on the reels representing multiplier and the other is the bonus game which results in you being awarded free spins.

The free spins round is undoubtedly the best feature of this slot, you are awarded 12 free spins and start with a stack of coins on the left hand side of the reels, Collect more coins to add to your stack and land the Midas symbol to get more free spins. As we said not a very complicated slot at all and the collect  features although seen before on other slot machines works well especially if Midas decides to make a frequent appearance during the free spin round. Its also possible to get awarded more free spins with a +1 for every bonus symbol that appears on the reels.

All in all Quickspin have done another good job in creating Midas Coins, its not as hard hitting and over the top as some of their recent releases but its still a slot that comes with decent winning potential and does enough to ensure that people will like to play it. And you can of course play it right here on our site for free using the Midas Coins Demo on this page.

If you are having problems trying to play the free demo of  Midas Coins slot we suggest refreshing the screen. If the problem continues to persist please contact us.