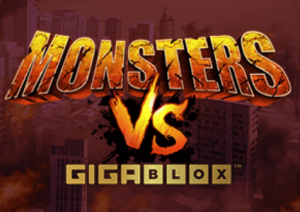 Monsters vs Gigablox is a 5 reel slot with 50 paylines developed by Hot Rise Games. It comes with an RTP of 96.1%, high volatility and a maximum win of 3116x your bet.

That last number is of course a bit of a disappointment as generally we would like to see at least 5000x your bet as a maximum win amount for a slot of this stated variance.  The RTP is of course spot on and its nice to see that it is a fixed RTP as well.

Theme wise what you can expect to see when you start the Monsters vs Gigablox slot demo is exactly that, a lot of monsters and the Gigablox mechanic which we of course know from Yggdrasil Gaming slots.

Now at the time of writing this review Hot Rise Games had released 5 earlier slots which to be fair we did not list for the simple reason that we have been very busy with our site. We did take a look at their back catalogue (and we may add them if enough people request it) and their themes to date have been pretty glossy and over the top and we rather like them.

Monsters vs Gigablox is much more of the same and in its own unique way looks and sounds pretty good.

Feature wise there are not a massive amount of features but what is there (including of course the Gigablox feature) works well. As well as this there is the monster symbol which can go berserk during the free spins round which is the bonus game for this slot.

All in all fun play wise its a very good slot but we do feel the attraction for real money play is going to be limited due to the low maximum win amount.

If you are having problems trying to play the free Monsters vs Gigablox demo slot we suggest refreshing the screen. If the problem continues to persist please contact us.