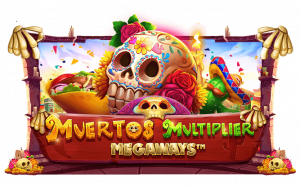 Muertos Multiplier Megaways  is a 6 reel slot with 117649 paylines developed by Pragmatic Play. It comes with an RTP of 96%, high volatility and a maximum win of 10000x your bet.

Those numbers are pretty much what we have come to expect from Pragmatic Play however with this developer each slot is always a variable RTP slot machine and you need to take this into account should you decide to play Muertos Multiplier Megaways for real money and not just for fun in demo mode.

What variable RTP means is that the online casino can select several lower settings that the one that we have listed which is the highest possible. As always we recommend checking with your online casino if it is not clear what setting is being used. The maximum win amount is of course very good for a slot with this variance.

Theme wise this is of course a Day of the Dead themed slot and we have seen many slots released with similar themes by other providers. The Pragmatic Play design team as usual have done a great job and this slot instantly made us want to give the reels a spin to see what Pragmatic Play have come up with this time.

It is of course quite difficult to make a Megaways slot that is different from the rest as there have been so many Megaways slots released that we really have lost count.

And when you play the demo of this one you might at first think that it is exactly like the majority of those as the base game is about as standard as it gets.

Where it gets interesting though is in the bonus game. The title of this slot already gave a hint with the word multiplier and we have seen these in nearly every Megaways slot that we have played before when the free spins round is triggered.

This one is different though and quite clever. We are however not going to explain to you how it works instead we suggest that you give the Muertos Multiplier Megaways demo slot a spin or two and find out for yourself just what a good slot this latest release by Pragmatic Play is.

If you are having problems trying to play the free Muertos Multiplier Megaways demo slot we suggest refreshing the screen. If the problem continues to persist please contact us.