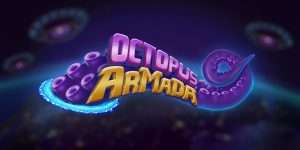 Octopus Armada is a 5 reel slot with 15 paylines that pay both ways developed by Blue Guru Games. It comes with an RTP of 96%, medium volatility and a maximum win of 3079x your bet.

So if you are going to be playing Octopus Armada for real money just keep that in mind.

With each slot by this developer telling a story this one features a theme based on the premise that the Octopus is actually a being from outer space. Its a bit of an out there theme but as you can see from the demo slot the designers have once again come up trumps as there is no denying that this one looks and sounds great.

The gameplay has also been pretty well thought out, first of there is the base game play which features wilds that can duplicate, in addition every wild that lands has a chance to trigger the free spins round.

We actually rather like the free spins round,  for every 4 wilds landing you are awarded more free spins the lower paying symbols (including the lower ranking high paying symbols) are removed.  Its a feature that works very well and we think that like the first release many of you are going to enjoy the Octopus Armada slot demo.

If you are having problems trying to play the free Octopus Armada demo slot we suggest refreshing the screen. If the problem continues to persist please contact us.