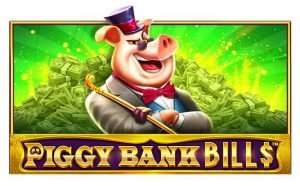 Piggy Bank Bills is a 6 reel video slot with 9 paylines. It comes with an RTP of 96%, high volatility and a maximum win of 5000x your bet.

Those are decent if not fantastic numbers but given the variance of Piggy Bank Bills 5000x your bet as a maximum win amount is definitely worth playing for. These numbers are about the industry average so we cannot really complain about them.

Theme wise Piggy Bank Bills is a bit of a heist themed slot machine. Aim of the game is to get the bills from the fault, a task that is not as easy as you would think at first glance.

This instantly explains the somewhat unusual layout that this slot machine has, since you are trying to match two halves of a bill in order to be able to claim it from the vault this is the way that the slot machine has been set up.

So in essence you have a 6 reel slot that plays like 3 pairs of two, its rather well done and makes this slot interesting from the get go.

To make the base game even more interesting random wilds will appear on the reels but the best chance of landing a big win is to trigger the bonus round which will award 8 free spins. During free spins the low paying bills/symbols are removed from play which instantly result in the possibility of more frequent and bigger wins.

This is especially more true by the fact that a 1000x bill makes an appearance during the free spins round.

Add to this the random modifier that can trigger on every base game and bonus round spin and there is definitely some potential here.

If we have one negative comment it would be that the free spins cannot be retriggered (something we always like to see) and also the novelty of this slot did wear of fairly quickly. Its an interesting release but not one that we think many players will play for a long time.

That being said we can only applaud Pragmatic Play for once again releasing an interesting slot which is a little bit different from the rest.

If you are having problems trying to play the free demo of  Piggy Bank Bills slot we suggest refreshing the screen. If the problem continues to persist please contact us.