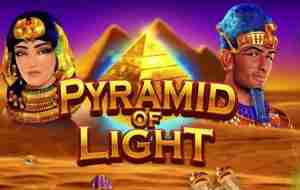 Pyramid of Light is a 5 reel slot with 5 paylines developed by Swintt. It comes with an RTP of 95.05%, low volatility and a maximum win of 1222x your bet.

If those numbers do not paint a pretty picture hold on to your hats as things are actually even worse than that due to Pyramid of Light like all Swintt slots coming with a variable RTP feature.

So should you decide to play this one for real money (and here is a spoiler alert you likely won’t want to) an online casino can set the RTP even lower (and much) lower than this already low number.

When you start the Pyramid of Light slot demo you will actually see a fairly decent looking Ancient Egyptian themed slot but this actually makes it even worse.

Clearly Swintt does have some talent in house yet the last three slots that we have reviewed have been sub par to say the least and having forced ourselves to try the Pyramid of Light demo slot  in the hope that things would improve we are sad to say that they did not.

Once again this is a slot with little to no features and absolutely nothing to get excited about, we don’t even like playing the demo let alone risking a dime on real money play which in our opinion would just be a total waste of time.

Here is hoping that Swintt comes up with something better for their next release, our advice would be to focus on quality instead of quantity and we just don’t get why they do not do this.

If you are having problems trying to play the free Pyramid of Light demo slot we suggest refreshing the screen. If the problem continues to persist please contact us.