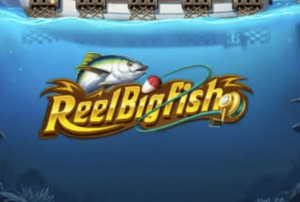 If there is one developer that has been spot on with their numbers from day on it is Blue Guru Games, each of their limited numbers of slots released to date have put a smile on our face when we saw the RTP and maximum win amount.

Fishing themed slots are all the rage right now so its not surprising that Blue Guru Games have opted to create Reel Big Fish.

Up till now we have liked what this developer has done with the themes of their slots and while Reel Big Fish might look a lot like some of the competitors slots we still really like the look and feel of this one.

Gameplay wise there are a couple of features that we would like to point out, these include the Pick and Click feature which while a nice little addition is not as enjoyable (or as rewarding) as the three levels of cash fish prizes can be.

If you have played some of the other recently released Fishing themed demo slots on our site that last feature will be familiar and so while it might not be new it works well in Reel Big Fish.

If you are having problems trying to play the Reel Big Fish demo slot we suggest refreshing the screen. If the problem continues to persist please contact us.

Reel Big Fish is a slot that is currently still in the development phase. As such the developer has not released all the details or made the Reel Big Fish slot demo available.