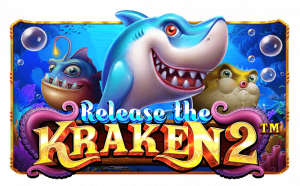 Release the Kraken 2 is a 5 reel slot with 20 paylines developed by Pragmatic Play. It comes with an RTP of 96.5%, high volatility and a maximum win of 5000x your bet.

Those numbers are pretty solid although with Release the Kraken 2 being a Pragmatic slot we do need to point out that it comes with a variable RTP. What this means is that an online casino operator can select a lower RTP setting than this one which obviously will affect real money play.

This is of course the sequel to the original Release the Kraken slot of which we also have the free slot available on our site. As such we had high expectations as the original was a more than decent slot machine.

Theme wise as you can tell when you start the Release the Kraken 2 demo the design team at Pragmatic Play have stayed pretty true to the original slot design. We once again find ourselves deep under water surrounded by a Coral reef and we have to admit it is once again a very good design that really makes you want to play the slot machine which naturally is what we did next.

So lets start with the base game which even on a spin which gives no result can result in a win thanks to the Guaranteed Win feature which is triggered randomly on any dead spin. What this means is that you can still get a 20x to 50x your bet win or if you get really lucky trigger the free spins round as well.

Before we get to the free spins though lets take a quick look at the respins feature which is triggered whenever 4 or more wilds appear. It will also keep going as long as more Wilds appear on the reels as the original ones disappear.

We also need to mention the Shifting Stack Wilds which are interesting because they also bring multiplying multiplier into play as well as Stacked Wilds so this is perhaps your best chance of landing a big win during the base game.

All in all we would have liked to have seen a little bit more of a maximum win amount but there is no denying that Pragmatic Play have created a pretty good sequel with Release the Kraken 2. It is certainly a slot that we ourselves will be playing both in demo mode and for real money once it is released.

If you are having problems trying to play the free Release the Kraken 2 demo slot we suggest refreshing the screen. If the problem continues to persist please contact us.