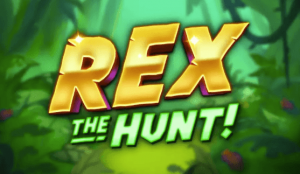 Rex the Hunt is a 6 reel slot with 178 paylines made by Thunderkick. It has a RTP of 96.16%, medium volatility and a maximum win of 4000x your bet. The Rex the Hunt demo slot is available to play for free on our site.

Regarding the above numbers the maximum win amount is of course very good for a slot that is rated medium for variance and the RTP at the setting we have mentioned is also good. However this being a Thunderkick slot it does mean that the RTP is adjustable by the online casino so if you are going to be playing Rex the Hunt for real money we suggest only doing so at an online casino that uses the highest RTP setting.

Theme wise we thought we might be looking at a Dinosaur themed slot machine when we first heard the title of this one but when we started the Rex the Hunt slot demo we were instead faced with a hunter called Rex who is in the jungle doing what he does best, ie hunting.

Its a slot done in typical Thunderkick style which means that as they always tend to do the theme looks and sounds pretty good. Thunderkick really does not make bad looking slots which is likely due to the simple reason that they focus on quality and not quantity releasing around 12 slot machines every year.

This also means that the gameplay is usually pretty decent and having played the demo of Rex the Hunt ourselves we can only conclude that this rule of thumb once again holds true.

Its not an overtly complicated slot and there is in fact just one feature during base game that is worth mentioning and that is the Stacked Symbols feature. On top of this there is a free spins round which is more than capable of handing out a big win in combination with the fore mentioned feature.

All in all its a decent slot machine aimed at the more casual player that does not like the highly volatile releases and in that light we can definitely recommend Rex the Hunt if these more player friendly slots are your thing.

If you are having problems trying to play the free Rex the Hunt demo slot we suggest refreshing the screen. If the problem continues to persist please contact us.

Rex the Hunt is currently in development and not all details have been released by the developer. As soon as we know more we will update our review and add the demo slot.