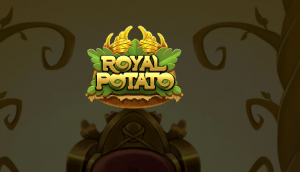 Royal Potato is a 5 reel video slot with 30 paylines developed by Print Studios and released by Relax Gaming under their Silver Bullet program. It comes with an RTP of 96.5%, high volatility and a maximum win of 30000x your bet.

Those are rather good numbers and it is nice to see that Royal Potato is a fixed RTP slot machine so you know exactly what you are getting into before you start playing for real money.

30000x your bet is of course a serious number even for a high variance slot so this is one of those slots whose demo we could not wait to try.

Theme wise we really do not know what to make of this one, we suppose that we have seen weirder themes than a potato themed slot machine but not very often. It looks decent enough its just a little different from the norm. Nothing wrong with that though and we can appreciate the fact that Print Studios is going with something different for the Royal Potato slot.

Gameplay wise things are a even more interesting thanks to super spinners which act like multipliers. You can have multiple ones coming into play and this makes it possible to land a pretty decent big win even during the base game.

Best part of this slot is undoubtedly the free spins round which starts with a giant sticky symbol in the middle which can actually get even bigger.

All in all its a bit of an unusual theme but there is no denying that Print Studios have created a pretty solid slot with Royal Potato. We had an absolute blast playing the Royal Potato slot demo and we honestly expect that most of you trying some free play will enjoy this one as well.

It is one that we will definitely be playing for real money ourselves and you can do so at any of our recommended online casinos.

If you are having problems trying to play the free  Royal Potato demo slot we suggest refreshing the screen. If the problem continues to persist please contact us.