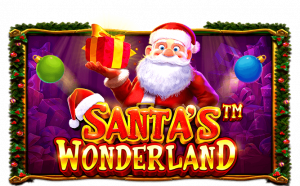 Those are definitely interesting numbers for this slot which Pragmatic Play have awarded the maximum number on their volatility scale. This still makes the maximum win amount a decent number though and higher than we have seen in the majority of recent Pragmatic Play slots.

Before we look at how Santa’s Wonderland looks, sounds and plays we should mention that this Christmas themed slot machine does come in different RTP versions. There are 3 options an online casino can choose from with the other two being lower values than the one we have stated which is the highest setting available and obviously the most attractive to players.

As always if you are not sure what the RTP of any slot like this (and many developers are releasing variable RTP slots these days) we recommend checking with your preferred online casino before playing  Santa’s Wonderland or any other slot like this for real money.

Ok so let us get back to the theme of this slot. As you would expect Pragmatic have done a good job in creating the right atmosphere and on the reels you will find lots of suitable symbols like toy trains, teddy bears and of course Santa himself.

Gameplay wise this slot is very similar to some of Pragmatic Play’s favorite tumble slots, its a mechanic which works well for them and players really seem to enjoy as these slots are some of the most played demo slots on our site.

With every spin there are 5 random spots marked on the reels and what you want as a player is to see different colored snow flakes land in those spots. Depending on the color each will do something different including but not limited to expanding symbols, refresh and a lucky Santa feature which ends up adding wilds to the reel.

All in all there a 5 different colored snowflakes each with their own unique effect, it works well and really adds another dimension to the gameplay. This however is not the main feature that is the Midnight Riches feature which can either be triggered naturally or bought using the buy feature which is available in all markets except for the United Kingdom. To trigger it naturally you need to collect 140 points during the base game.

There are actually 5 levels to this game each of which increase the multiplier that is active. No we could go on and explain more about how Santa’s Wonderland plays but instead as we are want to do we suggest just trying out the demo version that is available on this page.

Personally we think its a rather good Christmas themed slots and looks like being another popular Pragmatic Play slot both on our website and at our recommended online casinos.

If you are having problems trying to play the free demo of  Santa’s Wonderland  slot we suggest refreshing the screen. If the problem continues to persist please contact us.