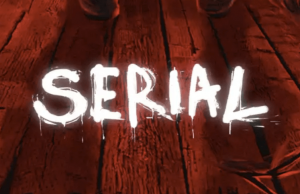 Serial is a 5 reel slot with 243+ paylines made by Nolimit City. It has an RTP of 96.07%, high volatility and a maximum win of 74800x your bet. The Serial demo slot is available to play for free on our site.

At the risk of sounding repetitive in our Nolimit City slot reviews we are however going to have to say that once again Nolimit City have released a slot machine where the numbers are pretty astonishing. The maximum win amount is of course the standout figure but we do have one caveat regarding the RTP on the Serial slot machine.

It is possible for an online casino operator to select a lower RTP setting than the one that we have stated which is the highest possible. At the lower settings real money play on Serial obviously becomes less attractive.

Now as we are sure you are aware Nolimit City are not shy about using some controversial subjects as inspiration for their slot themes and this slot definitely proves that point as it is obviously all about a Serial killer.

Perhaps not to everyone’s taste but we cannot deny that the quality of the graphics, animations and sound is once again of a very high standard that we have come to expect from the Nolimit City design team.

Gameplay wise there is once again also plenty to like starting with the xSplit feature which will increase the number of paylines in play. Add to this a Respin and Enhancer features and you end up with some pretty exciting base game play.

However that is not all there is as there are also two distinct free spins round and Nolimit City are introducing the xBizarre feature as well. This last one as far as we are concerned is the most interesting as it allows you to take your maximum win of up to 18000x your bet and try to double it three times in order to get to the maximum win amount.

Great thing about this is that its basically a free gamble as you get to keep the amount you risked if you gamble wrong.

All in all Serial is simply another very good Nolimit City slot machine that is bound to be played a lot both in free demo mode or for real money. As we stated at the start of this review though just keep an eye on the RTP setting that the online casino is using.

If you are having problems trying to play the free Serial demo slot we suggest refreshing the screen. If the problem continues to persist please contact us.