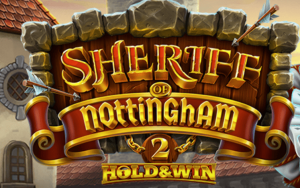 Sheriff of Nottingham 2 is a 5 reel slot with 20 paylines made by iSoftbet. It has  a RTP of 96%, high volatility and a maximum win of 7515x your bet.

All good numbers of course and this is exactly what we were hoping to see for this sequel to the original Sheriff of Notthingham slot which we really liked playing when it was first released.

In fact we were really looking forward to seeing what the iSoftbet team had come up with for this release so when we first started the Sheriff of Nottingham 2 demo slot we are happy to report that we found ourselves looking at a really nicely themed slot.

The reels are set in an old town in medieval England and the symbols on the reels have been designed with amazing attention to detail which just made us want to give this slot a spin in demo mode even more.

Now as it turns out iSoftbet have packed this slot with features almost too many for us to explain here. The best way to find out how this slot works is to simply try the demo and give the reels a few spins, its more fun than reading this review.

However for the formality we will state that there are Robin Hood modifiers, there are 6 of them and they are Bonus, awards Hold & Win; Sheriff Wilds, adds extra wilds; Win Spin, a guaranteed win; Mystery Symbols, adds mysteries to the reels; Wanted Spin, Sheriff pays money symbols; Stacked Wilds, with added multipliers.

Then there is a hold and win and if that is not enough there is also the Merry Men and the Sheriff of Notthingham that make an appearance. The last comes into play during the respins round and he of course tries to lock up he Merry Men. If he captures all 5 your are awarded a 5x multiplier at the end of the respins round.

If that sounds like a lot of stuff going on that is because there is a lot going on but the result is a slot that is not only a lot of fun to play in demo mode but one that is certainly worth some real money play. With both the RTP and the maximum win amount being very good this is a slot that we ourselves will be playing for real money at the online casinos that we list on this site who all have iSoftbet slots available to play.

If you are having problems trying to play the Sheriff of Nottingham 2  demo slot we suggest refreshing the screen. If the problem continues to persist please contact us.