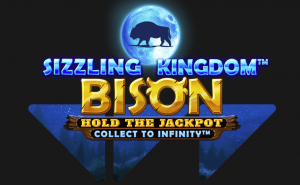 Sizzling Kingdom Bison is a 6 reel slot with 10 paylines developed by Wazdan. It comes with an RTP of 96.12%, variable volatility and a maximum win of 5000x your bet.

Those are actually pretty decent numbers and as always we at demo slots fun are a fan of the fact that this slot like all Wazdan slots comes with adjustable variance, so if you like more volatility (or less) you can simply change it with a click.

The winning potential on this one is solid as well so absolutely no complaints from us on that score.

When you first start the Sizzling Kingdom Bison slot demo you are probably expecting to encounter bison and while this might be true odds are that you will encounter lots of other wild animals on the reels first as the bison is in fact a special symbol. One thing that really stood out to us when we first saw the slot was the quality of the portrayed animals, they are really well designed and we had to look several times in order to appreciate and notice all the sublime details.

So while the background might be quite static (and even bland as some might say) overall the quality of the design is just really good.

This takes us to the gameplay of Sizzling Kingdom Bison slot and this too has been rather well thought out. The fore mentioned Bison symbol can be an expanding wild but its also the scatter symbol that could bring you up to 100 free spins which is a pretty massive and cool amount when you manage to trigger it with 5 blue bison scatter symbols appearing on the reels. And while this might not occur very often you will still be awarded 8 free spins for three, 15 for four and 24 for five of them appearing in a single spin.

But there is so much more to this slot than just free spins, Wazdan have seen fit to include a hold and win bonus game as well and unlike your standard hold and wins this one brings a lot more excitement to the table. We are not going to explain all the details but suffice to say this is one of the better hold and win games that we  have played and we highly recommend checking it out in demo mode.

Now after reading this far in our review you are probably thinking that would be it but nothing could be further from the truth as there is yet one more feature that can be triggered when playing this slot. Its called the Wild Rampage which can award you an instant jackpot prize of up to 5000x your bet, in other words a feature with serious potential for a big win. There are in fact 4 jackpots that can be handed out and in our opinion they are all worth your while.

This makes Sizzling Kingdom Bison one of the best Wazdan slot releases in the last year or so and personally we really like this one and will definitely be playing it for real money ourselves. In the meantime we have added the Sizzling Kingdom Bison demo slot well before the release date so you can try this slot exclusively on demo slots fun before it is officially released.

If you are having problems trying to play the free Sizzling Kingdom Bison demo slot we suggest refreshing the screen. If the problem continues to persist please contact us.