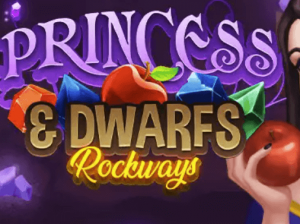 So looking at those numbers we can see that the RTP is a little on the low side and the winning potential (which we had to estimate) is actually pretty good and even above average for a slot of this type.

It has actually been a while since we reviewed a new Mascot Gaming slot, we have been so busy with perfecting our new website and adding more and more developers at players request that we simply did not get around to adding the slots that they have released in the last 6 months.

Playing the The Princess & Dwarfs Rockways slot demo for the first time though immediately made us remember that we are looking at a developer who knows what they are doing.

The fairytale theme is a nice one and we are going to have to give credit to their design team for doing a very good job. Lots of Dwarves and a cave with gems along with a giant reel set, what’s not to love?

The Rockways feature works well but its basically cascading reels with a multiplier which you have likely seen before. The Princess symbol is what you really want to see appear though because this triggers the bonus game and what a bonus game it is.

We’re simply not going to tell you exactly how this works but we are going to highly recommend that you give the The Princess & Dwarfs Rockways slot demo a few spins. We had a blast trying this one out and we are really going to make sure that we list each and every Mascot Gaming slot that is released from now on.

If you are having problems trying to play the free The Princess & Dwarfs Rockways demo slot we suggest refreshing the screen. If the problem continues to persist please contact us.