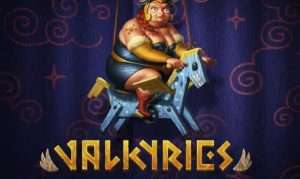 Those are of course excellent numbers but then again we would have expected nothing less from Peter and Sons whose slots statistically are always on point.
It is actually getting quite boring writing reviews of slots made by this developer for Online Casino Slots News, just like the numbers the theme and gameplay have been pretty darn good on every slot machine that Peter and Sons have released to date.

This time they have opted for an ancient Scandinavian theme starring (you guessed) it their own cartoon version/representation of a Valkyrie. The reels are set on what appears to be a stage and as always the look and feel really is good resulting in an engaging atmosphere.

Both the base game and the free spins round are quite interesting thanks to the addition of a Power Reel underneath the standard reels and Dropping Wilds of which there are two types, the red and the blue.

Even during the base game they are fully capable of handing out a big win although they in combination with the Power Reels feature really come into their own during the bonus game which coincidentally can also be triggered using the buy feature.

Now we would not recommended buying them although based on our experience playing the Valkyries demo slot it can pay off, however at 73x your bet it is rather risky.

So without wishing to sound like a repetitive record when it comes to Peter and Sons slot reviews Valkyries really is just another very good slot by this rather unique developer.

If you are having problems trying to play the free demo of  Valkyries slot we suggest refreshing the screen. If the problem continues to persist please contact us.