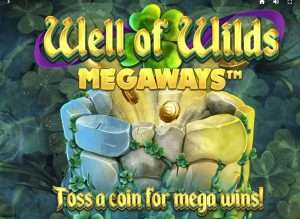 For a Megaways slot this is a pretty standard setup that is used by a large number of Megaways slots that continue to be released by basically every single developer of slot machines.

With so many of these types of slots continuing to be released it really does take a lot of effort and some clever thinking in order to create one that stands out from the herd so let’s see if Red Tiger have managed to do so with Well of Wilds Megaways.

First impressions are mixed, the graphics and sounds are decent we actually like the way that Red Tiger have created this Irish themed slot, however we do notice that there is no bar at the top like there is with a lot of Megaways slots.

What then have Red Tiger done to differentiate themselves from the rest? Well they have added several features. The first is called Well of Wilds and this is a symbol that can appear on the middle reels and turn 2 extra symbols into wilds, there is also a lucky coin which during the base game is basically just another wild but during the free or Lucky Spins as they like to call it these coins are collected and can trigger extra features if you collect enough of them.

Collecting 5 coins during the lucky spins will result in you triggering the lucky wishes feature which can award extra free spins, wilds or double the current multiplier.

Having played Well of Wilds extensively though we don’t think any of this is interesting enough to make this more than a decent Megaways slot. As always though you might well feel differently so try the demo of Well of Wilds Megaways on this page and let us know what you think of it in the comments below.

If you are having problems trying to play the free demo of Well of Wilds Megaways slot we suggest refreshing the screen. If the problem continues to persist please contact us.