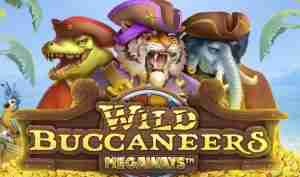 Wild Buccaneers Megaways is a 6 reel slot with up to 117649 ways to win developed by Four Leaf Gaming and released through Relaxed Gaming. It comes with an RTP of 95%, high volatility and a maximum win of 50000x your bet.

This is the second slot that has been released by Four Leaf Gaming and as you can see from the numbers they have cranked up the maximum win amount and stuck to the somewhat low RTP value that we also saw in their first slot.

There is of course not a developer who has not released a Pirate themed slot at some stage and if you add to that the fact that there have been countless slots released that feature Megaways we were a little afraid that Four Leaf Gaming might have made to bold a decision.

We then started the Wild Buccaneers Megaways slot demo and were happy to note that visually at least all appeared in order and we found ourselves looking a a great looking (and sounding slot machine). To be fair the quality is better than a lot of slots in this genre that we have seen release by other and more established developers.

But the real challenge was of course creating a slot with a Megaways engine that a) stands out from the rest and b) makes you want to play it.

Well the good news is that having played the Wild Buccaneers demo ourselves for a substantial amount of time we can only conclude that while a bold decision was taken the Four Leaf Gaming team have delivered.

There is just so much to this slot (almost too much to mention) with the standout feature being the Treasure Trail. In short this means that the additional reel at the top with which most of you will be familiar does not just show symbols it also has multipliers, wilds and free spins that can be triggered.

Then there is a coin collection feature which you can use to save coins and then spend them on buying free spins for example. You can also opt to select Nitro Spins which will cost 50% more per spin but increased Wilds and chances to trigger bonus games.

And bonus games is what really sets this one apart, first of there is a super spinner wheel which is triggered randomly and can award, free spins, cash prizes of up to 5000x, fortune finder and lucky spins.

Each of those except for Fortune Finder are pretty self explanatory but all worth triggering. The Fortune Finder however is something that is really interesting. When its triggered you select how much of your prize you want to risk, you will then see 16 pirate chests and a prize ladder on the right hand screen. Pick a box and if its not a dead mans skull you proceed. Its basically a gamble/pick and click feature but it does add a whole different dimension to the gameplay.

So while we might not be happy about the somewhat low RTP we will admit that Four Leaf Gaming have created one heck of a slot for their second release. We certainly had fun playing the demo and we are positive most of you will enjoy giving this one a spin as well.

If you are having problems trying to play the free Wild Buccaneers Megaways demo slot we suggest refreshing the screen. If the problem continues to persist please contact us.