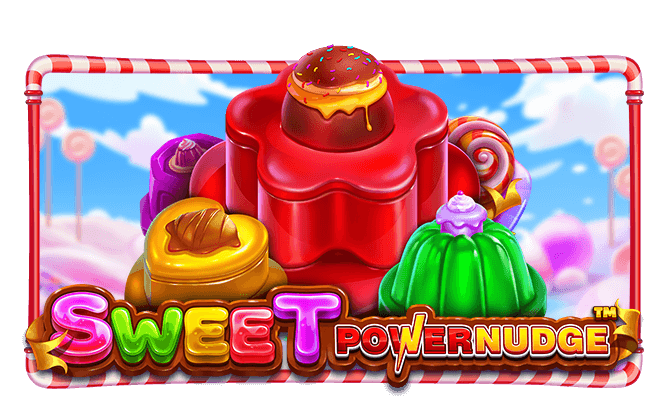 Treat yourself to the sweetest wins with Pragmatic Play’s Sweet Powernudge slot demo which is now available to play for free on demoslotsfun.com before being released officially on the 17th of January, 2023.

So when the day finally arrived we were extremely excited and things got even better when we first laid our eyes on the fantastic theme that that Pragmatic Play design team have created.

It is a beautiful looking slot with stunning visuals and a great soundtrack that will remind players of slots like Sweet Bonanza and Sugar Rush, two of the most popular slots that Pragmatic Play have released to date.

Like those great slot machines Sweet Powernudge also comes with 6 reels and a massive playing grid that uses a cluster pays mechanism and the much loved Powernudge mechanic that allows you to land sequences of wins with just a single spin.

As well as the large grid it is impossible not to notice an extra reel on the right hand side which turns out to be a multiplier reel that guarantees to elevate the gameplay to the next level especially in combination with the Powernudge feature which we have seen previously on slots like Rise of Giza Powernudge.

There are some classic Ace to Jack symbols to be found on the reels but the more important ones are the various coloured jellies of which the red jelly is the highest paying one awarding 100x your bet for a cluster of 15.

Obviously that is not the highest that you can win while playing this slot but you are going to need to trigger the free spins round in order to be able to land a larger win of up to 5000x your bet.

To do so you will need to collect at least 4 scatters during a single Powernudge round and this will award you with 7 free spins. Collect more than this and the extra ones carry over to the bonus game where every set of 4 collected later will trigger more free spins.

The multiplier reel which we mentioned previously only comes into play during the free spins round and can award up to 10x and this really is the key to landing the maximum win when playing Sweet Powernudge.

You can also opt to use the Ante bet to increase your chance of triggering the bonus game or buy them outright but both of these are quite risky options and this is exactly why we highly recommend trying out the demo slot before considering playing for real money.