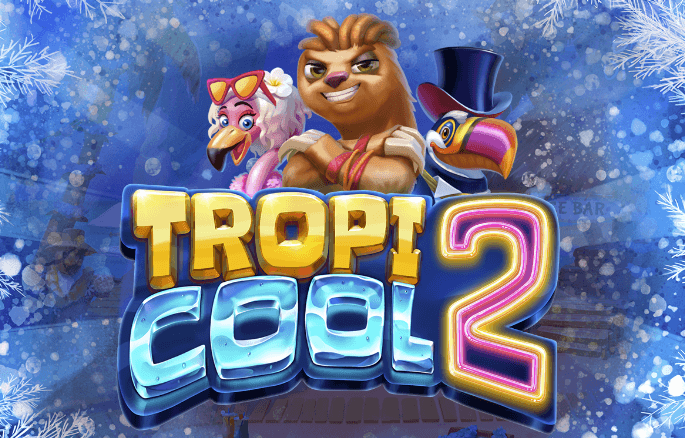 Tropicool 2, the long awaited sequel by Elk Studios demo slot game is now available to play for free on demoslotsfun.com. Scheduled to be released on the 7th of February 2023 we have once again been able to make the demo version of Tropicool 2 available prior to this date.

The original Tropicool continues to be a very popular slot both in demo mode and for real money play. No surprise really as it uses a fun filled theme, state of the art graphics, top notch sounds and above all excellent gameplay to create a engaging playing experience with definite chances of landing a big win.

To say that the sequel has been long awaited by fans of Elk Studios would be an understatement but start the Tropicool 2 demo slot and you will notice that the long wait has been worthwhile.

Elk Studios really seem to have pulled out all the stops for this one resulting in us really spending a few moments just taking in all the details before we decided to give the reels a spin.

Tropicool 2 sees our adventurous birds from the first installment in the series decide to move to a warmer climate where they make their home on the one beach that is owned by a sloth named Elmo that really does not like birds. It’s a fun story line that we enjoy and the graphics, animations and sounds really help tell the tale.

One of the first things that you will likely notice if you play the Tropicool 2 slot demo is that there are what appear to be an extra set of reels above the regular 6×5 grid which are called the “Cool Reels”.

Turns out that they are in fact really “Cool” as they have the ability to drop special feature symbols onto the reels below resulting in Wilds, Mystery Wilds, Row Swap and Locked Wilds.

The result is a slot that provides plenty of action (although not always wins) despite being highly volatile.

Elk Studios clearly decided that this was not enough so they also added Elmo Respins and then topped things of with not a cherry but with a free drops round that even comes with two extra features to spice things up and help you unlock that pretty massive winning potential of 25000x your bet.

So it would be fair to say that we are rather impressed by Tropicool 2. Are there then no downsides you might ask? Well to us there is one that comes into play should you decide to play this slot for real money.

Elk Studios have decided that having a fixed RTP of 94% is just fine and this is of course completely up to them. Personally though we at demoslotsfun.com feel that this is on the rather low side and we will not be playing this slot for real money because of this reason.

If you feel its fine and the maximum win amount makes up for it then by all means give it a spin, we are however just going to have to enjoy playing this slot in demo mode.

You can give the demo of Tropicool 2 slot a spin by visiting our Elk Studios demo slots section where we (like we did with Tropicool 2) will have the demo version of future upcoming slots by this provider available to play for free before the release date as well.