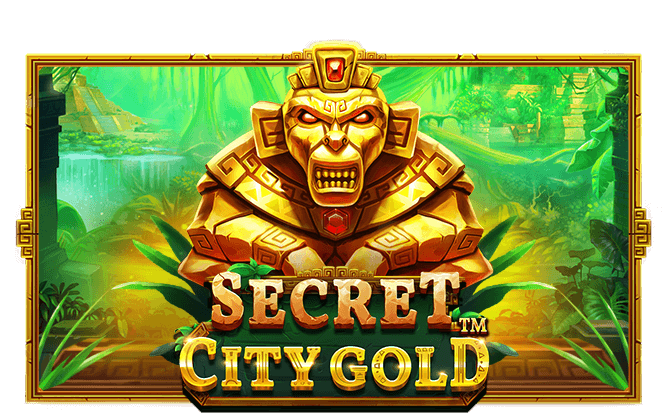 Pragmatic Play have announced their upcoming slot Secret City Gold which is due to be released on the 16th of January 2023. As the title suggests it is an Aztec themed slot machine and your goal as a player is to unlock the treasures of the ancient city in the jungle. As always at demoslotsfun.com we have made the Secret City Gold demo slot available for you to play before the official release date.

Playing demo slots like this is a fantastic way to not only have fun trying out an upcoming slot machine but it allows you to decide whether or not any slot machine is appealing or suitable enough for you to try playing for real money.

Pragmatic Play are known for creating some great looking historical themed slot machines and from the moment that you start the Secret City Gold demo you will feel that you have been transported back in time.

With it’s five reels and 25 paylines Secret City Gold might not be the most complicated slot that we have seen from this provider but it turns out that it does have a positive surprise for us in store.

The basic gameplay involves landing combinations of frog, lion, monkey, and snake symbols but things get a lot more interesting due to the addition of the Shape feature.

The shape or pattern feature is triggered at random and will result in a pattern overlaying certain positions on the reels. The current symbols will then be transformed into one of the symbols that was inside the pattern and we have to say its a fun feature that really can cause some pretty good wins even during the base game.

It really comes into its own though during the bonus game which is a free spins round that is triggered by 3 scatter symbols making an appearance on the reels.

Any pattern that turns up now also results in you getting an extra free spin and to make things even more exciting a multiplier feature also comes into play.

When you combine all these features you end up with a way of unlocking the huge winning potential that Secret City Gold has.

Pragmatic Play have of course released a number of Aztec themed slots in the past and some of those are played a lot until this very day. You can of course try all of these Pragmatic Play demo slots on our site but we are pretty sure that thanks to it’s great theme, exciting features and fantastic winning potential that Secret City Gold is going to do very well upon it’s release.

One last thing that we should point out is that the RTP on Secret City Gold is adjustable. The highest setting possible is 96.06% but there are two lower settings which are each 1% lower down to 94.06%.

An online casino operator can choose these lower settings so if you are planning on playing Secret City Gold for real money do check what setting they are using as it can make a difference with real money play.

But of course you do not need to wait until the end of January as you can try to unlock the treasure of the Aztecs by playing Pragmatic Play’s Secret City Gold demo slot right here on our site.